For the horn antenna, the most commonly used method to expand the frequency band is to add the ridge structure in the waveguide part and the horn opening part.Although the antenna has been applied in some engineering practice, the gain of the antenna decreases when the frequency is greater than 12GHz, and the main lobe of the direction diagram splits, and the main lobe saws more and more sharply as the frequency increases.This high requirements on the direction map, such as the antenna used as the main reflector feed source, EMC tests, has been unable to meet the requirements.In order to solve this problem, this paper, by using electromagnetic simulation software Ansoft HFSS start-up, by doing a lot of simulation experiments, the design of a frequency range of 1 ~ 18 GHZ broadband horn antenna, its gain in the whole frequency band is more than 10 db, pattern in 15 GHZ, began to split main lobe, and with the increase of frequency, until 18 GHZ main lobe and there are no big sag, the result is more ideal, can satisfy the engineering requirement of higher.

Based on the electromagnetic simulation software HFSS, the broadband double-ridged horn antenna is obtained through a lot of simulation experiments. It consists of three parts: feed part, ridge waveguide part and horn opening part.The detailed design process of each part is as follows.

The cross-section diagram of the ridge waveguide part is shown in figure 2. The cross-section size of the waveguide is a * 6, the ridge width is a1, and the ridge spacing is b1. The design is mainly based on the ridge waveguide theory.In the design, the value of b/a, b1/b, a1/a is first determined, and then the curve in reference [4] can be used to extract the value of characteristic impedance z0 infinity of TE10 module when CE10/ a and frequency are infinite. The characteristic impedance under given working frequency f can be calculated by formula (1) to facilitate the design of feed segment:

In order to improve the matching between the feed segment and the horn segment and gradually increase its cross-section size, the overall structure of this segment is designed to be a fan horn on E plane, and two wedge blocks are added to the two narrow walls to improve the direction diagram of the high-frequency end.

The length of the horn segment should be more than half of the wavelength of the lowest operating frequency to ensure that the impedance conversion process does not arouse high order modules.The mouth of the horn side according to the design method of conventional loudspeakers, according to the requirement of the gain differ with diameter surface to determine, because near field distribution are mainly concentrated in two ridge, so consider the weight of the actual speaker after processing two narrow wall can be removed, such influence on the low-frequency side direction figure slightly, after repeated adjustment, the last two narrow wall is made of medium plate, and evenly distributed on its six very narrow sheet metal, the shape of the ridge in accordance with the principle of impedance matching design.In order to make the feed point impedance smoothly transition to the flare free space impedance, based on a large number of experiments, the impedance transformation form is as shown below, which has a good effect

It can be determined by the condition that the impedance at the mid-point of the horn is the average of the impedance at both ends.Therefore, the shape curve of the ridge structure is generally exponential, and the additional linear term can extend the low-frequency bandwidth. 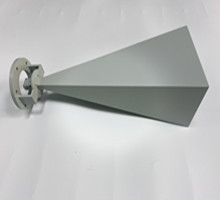 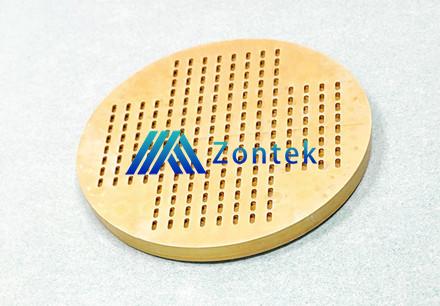